As we mark the 19th Amendment centennial and advances for women in politics, women of color still face impediments to electoral equality. 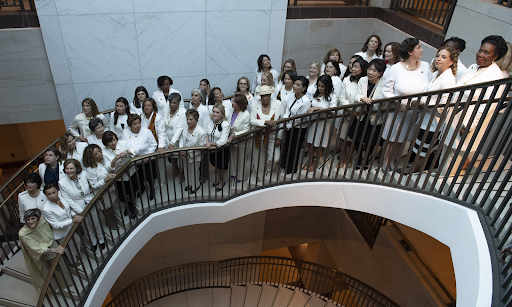 It was a remarkable sight. At the 2019 State of the Union address, women of all races and ages stood on a circular staircase in the Capitol, each wearing white. They were a historic group: a record number of women had been elected to Congress the November prior. Many of them likely had grandmothers or great-grandmothers who as young women were eligible but not legally able to vote.

Suffragists, the 19th- and 20th-century crusaders for women’s right to vote, often dressed in white. Sojourner Truth was a Black woman born into slavery who became a dogged advocate for abolition and for suffrage. Recalling their legacy reminds us of the heritage these congresswomen stand on, and the victory that enabled them to be standing there at all.

Image courtesy of Flickr After more than 80 years, the heroic tenacity of the suffragists finally came to fruition on August 24, 1920, when Tennessee Governor Albert H. Roberts certified the state’s ratification of the 19th Amendment. Tennessee was the 36th state to ratify women’s voting, and that was the threshold needed for the 19th Constitutional amendment to be approved.

Two days later, on August 26, 1920, it at last became reality, when U.S. Secretary of State Bainbridge Colby announced the ratification of the 19th Amendment to the U.S. Constitution in his home with no fanfare, no press coverage, no ceremony. The Amendment read simply:

“The right of citizens of the United States to vote shall not be denied or abridged by the United States or by any State on account of sex. Congress shall have power to enforce this article by appropriate legislation.”

Women went happily to the polls. But not all of them. As it turned out, the vote was enjoyed by white women but poll taxes and other impediments stood in the way of the vote for Black women.

Chinese immigrant women couldn’t vote until 1934, thanks to the Chinese Exclusion Act, which prohibited Chinese-Americans from becoming naturalized citizens.

Similarly, it wasn’t until four years after suffrage, when the Indian Citizenship Act of 1924 was enacted, that Indigenous people were able to cast ballots.

It took another 45 years for the vote to be secured for Black women. With the Voting Rights Act of 1965, it was codified into law that women could not be kept from the ballot box on account of their race.

Fifty-five years later, challenges to the hard-won right to vote still persist. Depressing the black vote is a scourge of the present-day electoral system with voter ID laws, reduced number of polling stations, and the latest, favored by our President—voting by mail. All disproportionately impact communities of color.

The Constitution is a living document, imperfect and malleable. It claims freedom as an ideal, but doesn’t include the many asterisks of history, the exceptions that were left out.

The true story of America is in the continuous fight for just reform, for legal confirmation of the benefits of American life that should be unquestionable, such as women and people of color having the right to vote. We make strides, then fall back, then come back swinging, and on and on.

So, we turn from celebration to commemoration of the 19th Amendment. Yes, it was a victory, but a blunted one because it was not extended to everyone. Let’s honor women and freedom in a real way, not just lip service with a hand held to the heart while the national anthem plays. Democracy requires deeds as well as words. Let’s make sure that as we celebrate the centennial of the 19th Amendment we include everyone in our decisions as a nation.

Not long after the 19th Amendment was ratified, in 1923, activists Alice Paul and Crystal Eastman wrote the initial version of the Equal Rights Amendment. It says simply:

“Section 1. Equality of rights under the law shall not be denied or abridged by the United States or by any State on account of sex. Section 2. The Congress shall have the power to enforce, by appropriate legislation, the provisions of this article. Section 3. This amendment shall take effect two years after the date of ratification.”

Decades after that initial version was drafted, the ERA has stalled in the ratification process. Today the basic rights of many vulnerable groups are being eroded, some slowly and some all at once.

The clock is ticking. Who will take back the mantle of leadership and make real, significant change for the nation, with the same courage and grit the suffragists had? Will it be you?

Ruth Nasrullah is a Houston-based freelance journalist specializing in religion and spirituality, politics and civil rights, and trails and travel. Read more at www.ruthnasrullah.com.